The practice of arranging orchestral works for smaller ensembles is as old as music history itself. From the baroque composers in the 1600’s who wrote not for a speci c set of instruments but for roles or functions, through composers as Mozart and Beethoven who used chamber arrangements of their bigger works as ways to promote and tour with their own music, to the almost forensic approach of Scho?nberg and his students in Vienna at the beginning of the XX century when they, within their selected group, dissected some major symphonic works which were very in uential and relevant at the time.

On this CD Natalia Ensemble is paying a homage to the genius of Gustav Mahler by approaching his colossal 5th symphony in an original arrangement for 17 players and performed without a conductor. This novel version of Mahler’s 5th gives a new perspective on the piece, it is both much clearer and transparent, showing every little detail that Mahler hid in the piece as if looked through a magnifying glass, but at the same time, the chamber music nature of this arrangement and of Natalia Ensemble gives this performance a unique force, energy and depth which are the essence of the works of Mahler.

“The chamber group Natalia Ensemble defends the transparency of their version of Mahler Symphony No. 5 and their performance seems to be for them one of the characteristics that has more connection with the original symphony. They also support this recording with the studies they did on originals and different editions.

The truth is that they have achieved much more than a clear and vibrant performance. The music works in a double sense, whether it is heard as a cameristic transcription, as if it is taken as a camera version that starts from its identity and its own characteristics, from this perspective to approach and identify with the Mahler 5th Symphony. The possibility of establishing a comparison with the original version of the symphony, starting from the same premises, becomes impossible and unfair, among other things because it does not agree with the intention of the Natalia Ensemble.

The recording starts with the initial solo of a trumpet, a masterful expression, and the appearance of the second theme in the hands of the strings. The way of the ensemble’s use of accent and tempo gives this movement the marked character of funeral march.

Natalia Ensemble manages to transmit the initial energy of the second movement through a vertiginous rhythm, which leads to the game between cello and flute. Emotional intensity and a clear contrapuntal game are enjoyed.

The call of the trumpet clearly marks the beginning of the Scherzo and this instrument keeps its protagonism alive every time it intervenes. In spite of the difficulties that can be found in this movement the interpreters draw them with a mixture of technical efficiency and a high level of musicality, without any jolts.

It might be thought that the Adagietto for strings and harp was the most favorable movement for a chamber formation, and of course the Natalia Ensemble achieves a wonderful and ample sound arch, where the lyricism and melancholy of this “elegy to love”.

In the Rondo-Finale the skill with which they solve their intricate counterpoint, the continuous inputs and outputs of the instruments, the fugitive passages and the internal dialectic is perceived.

The work of the instrumentalists of Natalia Ensemble is impeccable, with an articulation and a use of the dynamics, the timbre and the colors of the most opportune. To the evidence of how the soloists solve their passages adds the one that when it is required to the sound never lacks robustness.

Apart from the musical achievements of this first album by the Natalia Ensemble, it is gratifying to consider the reason that moved them to realize it, that part of the fact that a series of professional musicians wanted to meet to touch. This led them to make the decision to make a record and resort to self-financing. The recording took place in the Mozart Hall of the Zaragoza Auditorium in 2016, specifically from 24 to 26 April.

In the booklet that accompanies this release José Andrés Reyes clarifies that they did not take the usual steps to form an ensemble, but they did just the opposite. And in the specific case of the recording they acted in a similar way. “This idea was born of ourselves as a response to the need to bring this camera version to a wider audience. That’s why this album was financed through a crowdfunding campaign, with the support of hundreds of people who, like us, wanted to be part of something bigger than themselves, and a Mahler symphony certainly is” he says.”

“Make mine a Mahler Lite!

It’s been said that there is no such thing as a “casual Mahler fan”, so to attempt ANY radical departure in interpretation is a brave act indeed. Enter the young Madrid-based group Natalia Ensemble, whose exciting chamber version of Mahler’s beloved Fifth Symphony is bound to spark some debate and controversy – and no small amount of admiration. Founded just three years ago by a group of young musicians from the Gustav Mahler Jugend-Orchester, Natalia’s mission has been to re-examine the great late romantic and impressionist orchestral scores from a chamber music perspective.
For their first commercial recording, Natalia has chosen Mahler’s Fifth Symphony, (no doubt a better choice than the Eighth but still risky…). The playing is STUNNING and the textures, (no surprisingly) transparent! Hearing this score on such an intimate level reveals a universe of gorgeous details often buried even in the best orchestral interpretations. The album has been released on the Cobra Records label and is available for purchase through their website. For those with the requisite hardware, it is also available as an HD download from the Native DSD Music web store.

This is DEFINITELY a special – and provocative – treat for any Mahler maven on your holiday gift list!”

The chamber version of Mahler’s fifth symphony is a great discovery. The excellent Natalia Ensemble deserves much praise for this intimate and really impressive performance.

“The sound quality of this Cobra Records recording is remarkable. Clear and also with a richness in the bass that supports the percussion and the sound of the strings. The work of the sound engineer Tom Peeters, that every subtlety of the arrangement brings us is noteworthy.
We are faced with a full version of the intensity and lyricism that the work requires, with an outstanding performance. 17 musicians and the 5th summarize in this Mahler and already I am wishing to know what other record projects will confront this ensemble.”
=======
“La calidad de sonido de esta grabación de Cobra Records es notable. Clara y además con una riqueza en los graves que agradecen la percusión y el sonido de la cuerda. El trabajo del ingeniero de sonido Tom Peeters para que cada sutileza del arreglo llegue a nosotros es digno de mención.

Recorded with a excellent sound quality, it is an experience to see how the almighty Fifth sounds with only seventeen, and what kind of seventeen…..

Along with the exemplary quality of the recording, have been able to extract the essence of the work, so that we do not miss the original, with a taste and interpretive quality that asks to re-listen the album to re-enjoy the richness of its nuances .

Be the first to review “Mahler V” Cancel reply 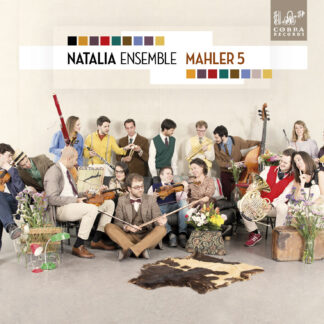