A recording is a composition too. Not only does it contain compositions, but together they form a new entity. At least, that is the case with this new recording by the Dutch pianist and Liszt Competition prize winner Mengjie Han. He deliberately links Isaac Albéniz and Maurice Ravel. Strange bedfellows, those two? One of them epitomising all things Spanish, the other a Frenchman through and through. And rising between them, literally and metaphorically, the imposing peaks of the Pyrenees.

However, nothing is as it initially appears to be. Although of course Albéniz’s Iberia and Ravel’s Le Tombeau de Couperin can only be played consecutively, Mengjie Han would have preferred them to be heard ‘simultaneously’, so as to demonstrate how interwoven their idioms are. After all, Ravel is a lot more Spanish than you might expect, and Albe?niz more French. Ravel incorporates Spanish rhythms, often with that typically Spanish ambiance that you could – somewhat paradoxically – describe as rough and sultry; Albe?niz on the other hand scaled the greatest heights only after discovering French impres- sionism. They cross the Pyrenees in opposite directions, as it were, breathe in the foreign influences and use them to enrich their work.

This is a really amazing album. It is a remarkable showcasing of the music of Isaac Albeniz and Maurice Ravel and Mengjie Han’s most unique way of coaxing the music out of the piano. Well done!

Be the first to review “Evocación” Cancel reply 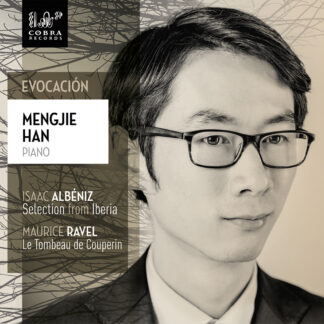