Almost every commencing violinist comes in contact with the violin concertos of Joseph Haydn. Who among us has not practiced the first movement of his cheerful G-major concerto? However, these wonderful gems of Haydn’s extensive oeuvre are now rarely heard on the concert stage.

After the death of Haydn, his violin concertos unfortunately became used more as study material for young violinists than concert pieces. Perhaps this is due to the lack of a certain grandeur, extraversion, and obvious virtuosity for the violin soloist, but these concertos are Haydn at his best; full of simplicity, elegance, and an abundance of charm. The transparency of these works and the lack of obvious virtuosity actually makes them a great challenge for performers.For The String Soloists and I, the study, investigation, and frequent performing of these concertos has been a true revelation over the past season. Initially written for the Esterhazys and presumably for the solo violinist of the court ensemble at that time, Luigi Tomasini, as a listener you will feel drawn back into the 18th century.As was common at the time, I have written my own cadenzas for these concertos in which I try to briefly express my thoughts on the musical material and add a shimmer of my own character to every movement.We hope you enjoy these wonderful concertos by Joseph Haydn and that this recording can contribute in their public revival and return into the concert hall!

Lisa Jacobs fields a band of no more than 14 string players, with a very present harpsichord accompaniment. Ensemble and phrasing are ideal, and Jacobs’s own cadenzas are in keeping with their surroundings. Her tone is clear and consistent.

The fast outer movements are incisively articulated, sprightly and energetic, especially the punchy, rhythmic finales of nos.1 and 4, and their changing moods are admirably contrasted. The reflective central slow movements are interpreted with beauty and poise, albeit with an intensity that barely stops short of Romanticism, especially the Adagio moderato of no.3. However, they showcase perfectly the sonority and tonal purity of the soloist’s 1683 Rugeri.
She seems very much at home with her small group of Amsterdam-based string players, who, led by Janneke van Prooijen, interact with her alertly and sensitively.

Young Dutch violinist Lisa Jacobs takes a very appealing approach to Haydn’s under-appreciated violin concertos…These violin concertos are from an early period in Haydn’s career, and Jacobs presents them with en ear to their baroque connections. This means embracing their long melodic lines, and recognizing that the music is more discursive than the more concise compositions of middle and late Haydn. Jacobs recognizes that the violin concertos are episodic, and that it is not a bad thing to explore this aspect. In the earliest C major concerto, Jacobs’s opening fanfare rings confidently. Her cadenza is both graceful and showy. The concluding presto is full of gentle tension. The A major ‘Melk’ concerto opens with a measured pace, but is not slow. In Jacobs’s hands, we are reminded of C.P.E. Bach more than Beethoven. The G major concerto is perhaps the least interesting of the set, until the dazzling rondo finale, which here makes a great conclusion to the disc…this new Haydn set is stylish, well-recorded, and rather addictive.

Be the first to review “Haydn Violin Concertos” Cancel reply 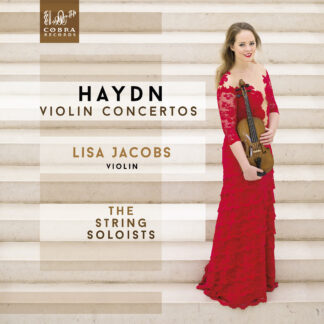