Giacomo Facco was born on 1676 in the Most Serene Republic of Venice, in the small village of Marsango. The rst documentary records of his work are in a series of cantatas, dated 1702, kept in Naples. It is there he may have started working for Antonio Spínola. The Spínola family was part of the high Spanish nobility and Antonio, during the War of the Spanish Succession, was appointed Viceroy of Sicily, where he lived until 1713. Facco also moved there with the marquis’ court, and had a period of intense activity, during which he premiered several operas and oratorios, as well as some cantatas.

Spínola and Facco however would not stay in Sicily for long. With the signing of the Treaty of Utrecht, Spain handed over the Viceroyalty of Sicily to de Duke of Savoy. Therefore, Spínola and all his entourage headed for Spain to rebuild their lives, starting a new chapter in the history of Europe. Facco also headed for Spain and was hired by the court in Madrid as master to the Infante Luis, Prince of Asturias, and as a violinist in the Chapel Royal. During his rst years there, his reputation as a composer led him to write what many consider the rst Italian opera with a libretto in Spanish, Amor es todo Invención, premiered in the Coliseo del Buen Retiro in 1721. Facco stayed in Madrid working for the court of the royal family until his last days, on 1753.

The music selected on the CD Giacomo Facco: Master of Kings is a journey through his cantatas and his cello music, exemplifying two stages of the composer’s life; works from the years he worked in Italy and works from the time he spent in Spain. After the success achieved with their first recording with COBRA records, Guillermo Turina, Eugenia Boix and Tomoko Matsuoka are back with this CD of Giacomo Facco’s works. The world premier recording of a monographic chamber music repertory by an Italian composer who is probably one of the most important and in uent composers of the Spanish Baroque era.

RITMO magazine 5 out of 5

The work of Guillermo Turina, Eugenia Boix and Tomoko Matsuoka, rediscovering Italian musicians who worked in Spain during the first decades of the 18th century, is priceless.
It is really exquisite music, magnificently performed. Listening to Boix’s voice is always a joy.

While the cantatas he published while working in Italy are a little pedestrian, the later Spanish-period works sound more convincing. However, none of the cantatas sound as interesting as Facco’s innovative and engaging sinfonias for cello and harpsichord. This is due on the present CD to Guillermo Turino’s exciting technique on the Baroque cello, which brings these latter works to life….

Be the first to review “Giacomo Facco: Master of Kings” Cancel reply 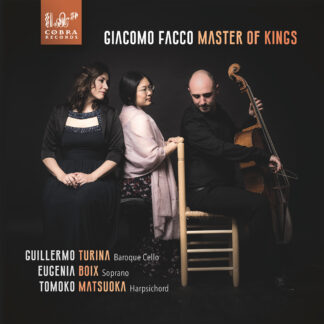