Nearly seventy-five years after the liberation of May 1945, World War II still plays a substantial role in European politics, in our thinking and our actions. We are now at a remove of three generations from World War II and are still discovering new facts, still confronted with new insights, still finding new testimonials from those times. In a certain sense, this CD also belongs to the category of recently discovered testimonials from the dark years between 1933 and 1945. Everywhere freedom of speech was restricted, and not only in Europe. Moreover, several generations of Jewish composers and performing musicians seemed simply to have disappeared. Not until a quarter of a century after the war did people start to ‘discover’, little by little, just how much music had been lost through the war. Yet today, unknown compositi- ons from those years are regularly discovered, and works thought to have been lost are found again.

The music performed on this CD is by Jewish composers whose lives were destroyed in World War II by persecution, murder or exile. The title of the CD refers to the book by Auschwitz survivor Elie Wiesel: After the Darkness: Reflections on the Holocaust. The project After the Darkness means a lot to The Hague String Trio. They feel it is a privilege to let the music of these composers be heard, to create a lasting testament so their music will never be forgotten and shall live on After the Darkness.

The Hague String Trio was founded by Justyna Briefjes, Julia Dinerstein and Miriam Kirby in 2006. They came together to share their love for chamber music and have formed a strong bond over their many years as an ensemble. The trio enjoys exploring the extensive string trio repertoire, from treasured masterpieces to lesser known compositions which they feel deserve more recognition. They also work closely with composers such as Robin Holloway, Kerry Woodward, Arne Werkman and Reza Nakisa as well as fellow musicians including oboist Pauline Oostenrijk & pianist Daniël Kramer with whom they play regularly. The Hague String Trio performs throughout the Netherlands, and gives concerts every year in England and Germany, where it has built up devoted followings.

Well documented, superbly performed and recorded, this is as good an advertisement for the string trio as you could imagine, and I would be prepared to lay a bet that a majority of listeners would think this was a string quartet on a first encounter. This CD is also a fine testament to a group of composers who all suffered under the oppressive regimes of the mid-20th century; well worth anyone’s attention, and what the Dutch would call an ‘aanwinst’ for any collection of good chamber music. Dominy Clements

The Hague Trio’s accounts of Klein’s Trio, Krása’s Passacaglia and Fugue and Tanec (‘Dance’, a miniature tone poem on the idea of dance) are nothing if not competitive with the best of their rivals (listed below). Their ensemble is as tight as their collective intonation is sure, and they bring a keen expressivity to these scores written under appalling conditions. Rival recordings tend to couple them with music by other ‘Holocaust’ composers, though Weiner and Kattenburg will be new names to most collectors. Kattenburg (1919 44), a one-time pupil of Willem Pijper, was for many years known only by a flute sonata until the chance location of a box of manuscripts in an attic in 2004. His compact Trio is a real find. Weiner studied with Kodály, whose influence is manifest throughout this charming Serenade – Guy Rickards

This outstanding music burns bright, and The Hague String Trio brings energy and soul to this heartfelt collection. A highpoint of the disc is a world premiere recording of Dick Kattenburg’s Trio à cordes, completed on the brink of World War II, when Jewish participation in professional musical life effectively vanished…Concise and powerful, the trio is a vibrant single-movement work packed with invention, and performed here with dizzying verve. – Kate Wakeling

There’s a well-researched booklet note to read and an unproblematic, well-balanced recording to enjoy. The performances are very persuasive and the programme balanced and attractive. – Jonathan Woolfe

Whether it is Hans Krása and his Passacaglia & Fugue and Tanec, or Gideon Klein, who in chronological order follows Krása with his irresistibly impressive and compositionally ingenious String Trio of 1944, the Hague String Trio are always three expressively rich and technically perfect soloists. Which make the Hague String Trio a means to pay tribute and memory to these unfortunate souls. Souls who, despite their misfortune, have left a work that can be enjoyed by music-loving people. László Weiner lived a short life, Mr. Dick Kattenburg even shorter. The first is captivated by the creativity of the three-stroke song called Serenade, Kattenburg is represented by a six-minute contribution in the form of a compositionally conceived composition Trio à Cordes (a world premiere recording).
As if hiding, waiting on the disc to appear as the last song in the order – String Trio Op.48 of Mieczyslaw Weinberg (this year’s 100 years since his birth) in 1950. Weinberg, who left behind an enormous amount of works, is a man whose style and the honest immediacy of the recording of The Hague Trio breathes and is in my view the jewel of the entire disc. I don’t even know how many times I let it go, but it was always like I listened to it for the first time. The darkness of World War II never leaves us. Hans Krása, Gideon Klein, László Weiner, Dick Kattenburg and Mieczyslaw Weinberg. There’s The Hague String Trio. – Milos Bittner

Be the first to review “After the Darkness” Cancel reply 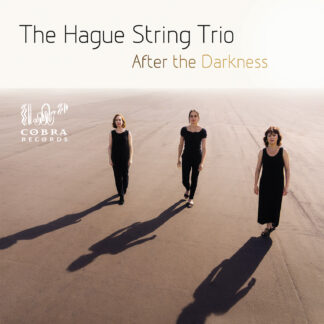