Sometimes projects arise which just keep expanding. This was the case for me a after the CD “Whispering Leaves” which cellist Lucie Štepanova and I released in 2018 with works by Janacek, Palenicek and Martinu. While preparing for this recording I was listening and reading an enormous amount about Czech music, as well as playing a lot of other Czech composers. Because of this I became intensely fascinated with this music.

The immediacy, the honesty of expression has an incredible appeal to me. It is the sort of music which you experience directly, right now in this moment, not only as a performer but also as a listener. You stand in the middle of the story. It is fascinating music, but strangely enough there is still much left to explore. The beautiful music of Jaroslav Kvapil for instance is all but forgotten.

And sometimes you have to undertake real journeys. Working on this project we have also tried to follow in the footsteps of the composers. Climbing the church tower of Policka, in which Martinu was born, playing on his grand piano, wandering through Janacek’s Hukvaldy and around the villa of Kapral in beautiful Tti Studne, walking in the rapeseed fields of Fryštak, where Kvapil was born and grew up. And much more. In Vieux Moulin a 94 year old neighbour told us that Martinu was a strangely silent man, who never spoke and didn’t come into the village. They thought he was deaf, and sometimes saw him sitting under a pear tree behind the house, thinking and writing.

As well we went to antiquarians and libraries, searching for scores and books. It is incredibly moving to hold a first print of “In the Mists” in your hands, to receive a shipment of unknown Czech music from an antiquarian, or to be allowed to touch that piano of a composer. With tears in my eyes I played the first bars of Suk’s “Love Song” on his own grand piano in Kretovice, in the presence of his grandson Jan Suk. This is only the beginning of all the new solo and chamber music projects which I would love to share with you.

Well-shaped and lively performances of Czech classics. This enterprising disc charts a pathway through Czech piano music of the twentieth-century (give or take) in performances of clear high points, such as Janáček’s In the Mists, but also through premiere recordings of cycles by Jaroslav Kvapil and Miloslav Kabeláč. – Jonathan Woolfe 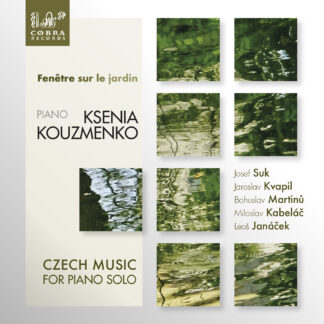