Nienke Oostenrijk and Marianne Boer bring a selection songs of Schubert with the theme “Ladies Only”.These songs represent Schubert strong empathy for women in poetry. Uncertainty and emotional fluctuations were seen as typically feminine qualities, and it is not surprising that poets used from the Biedermeier time female characters to express their grief.Oostenrijk has done excellent research into the meaning of these songs and therefor has also contacted the famous English philosopher Roger Scruton, who wrote the essay “Schubert is needed now more than ever”. She paints an accurate picture of how feminine feelings have played a role in Schubert’s life.The booklet of this production has thus become a meaningful document.Nienke Oostenrijk and Marianne Boer perform these songs with great understanding of text and context in this album. This creates a beautiful combination of depth and naturalness, in which the interaction is truly sublime.

Not often do you hear a recording where the intensity of the music, text and performance is inextricably linked. Singer Nienke Oostenrijk a and pianist Marianne Boer is an excellent duo. ‘Ladies Only – Love and Lament’ is a collection of songs based on poems by Goethe, Macpherson, Mayerhofer, von Schrober, von Chèzy, Scott, de Jachelutta en von Schütz put to music by Franz Schubert between 1814 and 1825. Because voice breaking Schubert could not longer be a part of the Konvikt, a kind of church music boarding school and therefore he returned to his childhood home in Lichtenhal (near Vienna) in 1814. His father gave him a piano and Franz composed the immortal song ‘Gretchen an Spinnrade‘, which is the opening piece of this album. A brilliant song about Gretchen who became unintentionally pregnant. A composition in 3-beat, full of piano arpeggios and exquisitely sung by Nienke Oostenrijk who beautifully colours her voice in the B section, where the man appears. A way of singing she works with the whole repertoire. Easily following the emotional content of the text, unfortunately not everywhere clearly audible. She adds a little vibrato, her voice is crystal clear and beautiful ’round sound’ in high notes with sparing use of crescendos. She lets the music speak for itself, as can be heard in ‘Kolma’s Klage‘ where the moon lovely shines in the B section, sophisticated, sober and intense. Pianist Marianne Boer has a sympathetic touché. Even in the robust piano parts she prefers the cantabilé touché, like if she always looks for the bright side of the story in the doom-and-gloom parts of the lyrics. Beautiful songs are ‘Gretchen’s Bitte’, ‘Viola’ and ‘Ellen’s Dritter Gesang (Ave Maria)’ that provides goosebumps for 6:21 minutes. Yes indeed, ‘Ladies Only‘ is an excellent album. Franz Schubert would be incredibly proud of these two wonderful musicians!

Be the first to review “Ladies Only” Cancel reply 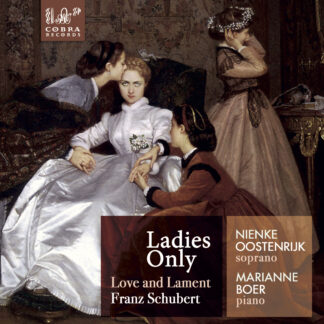