Philippe Graffin proves himself an equally eminent Mozartian on this release, a two-disc set with the leading Japanese violist Nobuko Imai. In the sprightly Sinfonia Concertante, two delightful Duos, the Third Concerto plus an Adagio and a Rondo, the multi-tasking Graffin takes on the roles of soloist, chamber musician, director, and composer of his own cadenzas. He is backed by the versatile Brabant Philharmonic Orchestra of Eindhoven, The Netherlands. The stylish packaging features another typical twist by the resourceful Graffin, who commissioned leading journalist and novelist Jessica Duchen to write a short story for the booklet.What status should we assign to an artist’s youthful productions? This question arises when we listen to the first three works on this program: the Concerto KV 216 (1775), the Adagio KV 261 (1776), and the Rondo KV 373 (1781, a bit later, of course, but stylistically akin to the preceding compositions). Commentators have usually compared them to the later, more mature concertante works, in particular to those for piano, taking the opportunity to contrast the “galant” freshness of the former with the expressive power of the latter. Critics also dwell on all the qualities that Mozart’s experience in the realm of opera later contributed to his powers of expression. And indeed, a comparison between these early works and the Sinfonia Concertante, written around the same time as Zaïde, confirms this opinion. Not, of course, that Zaïde is Die Entführung aus dem Serail, but nevertheless, it was the first libretto which really excited Mozart’s interest, as witnessed by his new preoccupation with the dramaturgy of the piece. It signals a major change in his approach to the classical style. And this exposure to the world of the theatre was to have a direct influence on Mozart’s concertante writing, not only because it would lead to a renewal of the dynamics of the concerto form, but also because it would allow him to reassess the relationship between soloist and orchestra. And this, above all, is what demonstrates the distance between these two “youthful” works on one hand and the Sinfonia Concertante and the two Duets on the other.

Pleasure’s peak is reached on this two disc set with Mozart’s violin/viola duos, played with sparkling panache by the French violinist Graffin and Nobuko Imai. Graffin’s forceful playing also brings smiles in the third violin concerto. But the recording dulls the Brabant Orchestra, and the violin/viola Sinfonia Concertante can drag.

Graffin is a fine violinist, though, and his playing alongside Imai’s immaculate expressiveness in the slow movement is wonderfully natural, just as their give-and-take in the two Duos that make up the second disc is perfectly judged.
Andrew Clements

More impressive are the works with viola. In the Sinfonia Concertante, after an alert, full-sounding opening tutti, Graffin and Nobuko Imai steal in perfectly for their first phrase. The Duos make a hefty bonus on the second disc, and are performed with a flexibility that never becomes flabby. Martin Cotton

Their playing in the Duos and Sinfonia concertante reveals not only refined technical finish but a just combination of intellectual erudition and emotional involvement.
Good to very good sound with noticeable variations in transfer levels.

Holland’s Brabant Philharmonic Orchestra reacts with admirable sensitivity to the unusual readings asked of it…. The sound is warm and transparent….

In the Sinfonia Concertante… Graffin and Nobuko Imai steal in perfectly for their first phrase. … they are clearly listening to each other, and responding. Imai’s burnished tone is, as ever, a delight, especially at the bottom of the range.

“Balanced and luminous: these words best describe this recording. In the orchestral works, including the Violin Concerto no 3 and the Sinfonia Concertante for violin and viola, one marvels equally at the remarkably elegant solos as at the gracious, yet virile orchestral playing. The balance is so well dosed that it seems as if this music, so often stiff was only ever meant for dancing. Philippe Graffin unveils for us a Mozart familiar and yet unexpected; surprisingly poised and imaginative.
The same chemistry is found in the second CD where Philippe Graffin and Nobuko Imai, who have worked together for many years, play the two Duos for violin and viola K423 and K424 with total simplicity. There is no need for more: sensitivity and sobriety know how to deliver this music of all its charm and freshness.”

Be the first to review “Philippe Graffin, Mozart” Cancel reply 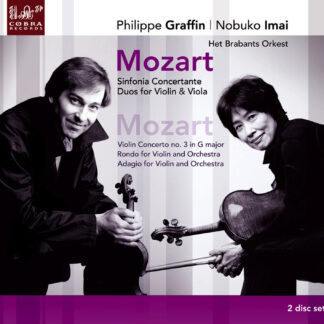